Alex Salmond, Scotland’s First Minister, has now entered the final leg of his seven-year effort to destroy the British Union. 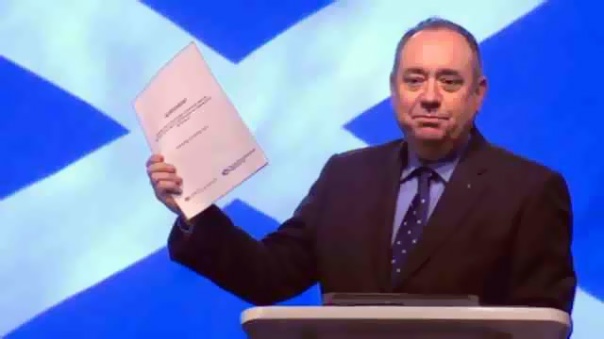 Alex Salmond is not a man of high principal, but rather one who fancies a grander title than that of First Minister.

In September of next year he will throw the most almighty spanner into the works of our 300-year-old marriage. If he is successful the English and Scottish nations will be back to where they were in 1707 and the universally acknowledged happiest coming together of two former foes will be over.

Without a single Sassenach anywhere in my bloodline that I am aware of, I very much value things Scottish and have a natural urge to wish her well. On the other hand, having been sheltered by the English for much the greater part of my life I have come to an appreciation of the many fine qualities which reside in that nation. As a consequence I choose to regard myself as an Anglo-Scot. Both nations, before they joined, had boundless potential, but it could never be fully realised while they spent their time and energy, bickering, eyeing each other reproachfully and often leaping at each other’s throat.

When, finally we made a deal to end the lunacy the results were truly astonishing. An industrial revolution was unleashed upon the world and an empire created the like of which had never been seen in the whole of human history. While maintaining their distinctiveness both nations have cut a dash in just about everything they have put their hand to and, along with Wales, have made a wonderfully harmonious union.

Mr Salmond will also find that separation, if he achieves it, will come at an eye-watering cost. All the institutions which form the modern state will have to be disentangled and new ones re-created north of the border, including (absurdly) fresh armed forces. The Scots should not assume that they will gain automatic entry to the EU as, by their own admission, they will be the resurrection of an old state that had never applied to Brussels to join. It is difficult to see how customs barriers and other niggling absurdities could be avoided were Scotland to go its separate way.

We are in the midst of the longest recession since the Napoleonic wars and Scotland would be unwise to take for granted continued English goodwill if she goes ahead. She should be mindful of the fact that it was English money that saved her from implosion during the Royal Bank of Scotland banking crises presided over by Scotsman ‘Fred the Shred’. The Libor manipulation of interest rates, for instance, was pure criminality. Scotland would also do well to remember that when she was poorer than England during the 70s the ‘Barnet Formula’ was invented to balance out incomes. Scotland has long since ceased to be poorer, but the annual payments go on.

They amount to £1,600 more per head of population than England. Justice suggests this arrangement be ended, but the English are not anxious to pick a quarrel with what some believe is their cantankerous neighbour, who can be counted on to resist fiercely. Many will take the view that the ungrateful Scots are biting the hand which feeds them and when exasperation sets in they might start to say that they would be better off without them anyway; at least financially. They do not forget that Scotland is greatly over-represented in Parliament and that it is the Scottish socialist vote that has kept Labour in power for so many years in England and look where that got us all. They will point out that the public sector in Scotland is hugely greater proportionately than in England and more social benefits are handed out there. In addition they get free university education and prescriptions along with free care in old age. I just hope that these salient facts are not too much to the fore as the arguments rage back and forth during the coming months and that insults do not begin to be traded.

My own view is that Alex Salmond is not a man of high principal, but rather one who fancies a grander title than that of First Minister; one like Prime Minister. For the moment, he proposes to keep the Queen as head of state, but then soon might not hubris drive him on to displace her and become president?

In order to whip up anti-English sentiment Salmond has timed his referendum with the 700th anniversary of Scotland’s greatest military triumph over the English at the Bannock Burn. Also he hopes to benefit from the afterglow of chauvinism following the Commonwealth games in Glasgow a few weeks earlier. Lowest and most desperate of all, in my view, is his insistence that 16-year-olds should be allowed to vote. Clearly he believes that these immature minds are easy fodder for his manipulation and will be swayed by all his nationalistic angst. But does anyone, including Salmond, seriously believe that such weighty issues, which have the potential to change our political landscape forever, be properly understood by people with so little experience of the world? As one Scotsman to another I say to Mr Salmond you are a humbug. Now there’s a good old-fashioned word, but one that in my eyes sums him up perfectly.

Those who have not rumbled him already will surely do so when all the arguments are laid before them and they will send him packing. I know, like Tony Blair, he has the gift of the gab and has an answer for everything, but his people have something much more valuable and big going for them: they are CANNY.