← China’s debt-fueled turbo growth will end in tears
Have the years in Downing Street addled the PM’s brain? →

Better the devil you know 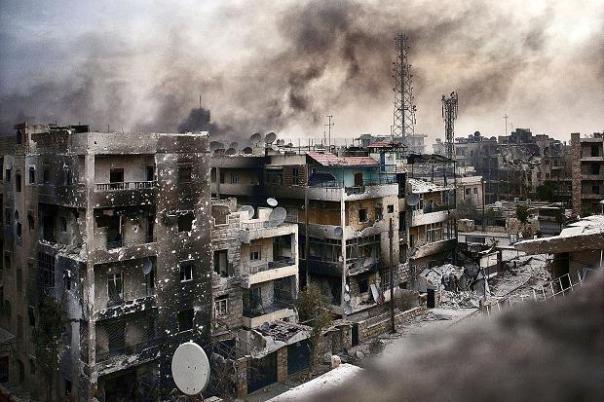 Bombings continue in Aleppo, Syria’s largest city and commercial hub, which has become a key battleground in the country’s protracted civil war.

It begins to look as if the dreadful Assad may yet go on to win the Syrian civil war. Why is this? The quagmire which is Syria is about as complicated as ever it gets in politics and religion, and with the latter playing the dominant part I will not attempt to explain – even if I were up to it – all the competing factors at work in that benighted area. Suffice it to say that it was and is a devil’s brew which we were wise not to get drawn into, even though our prime minister was up for it. Parliament said no and that was the end of it.

It was this vote, I believe, which saved an always-cagey Obama from being swept into the affair and commencing air strikes. Incautiously (if he never meant what he said) he spoke of ‘Red Lines’. Luckily the Commons vote caused Congress to take stock. It values its British ally’s diplomatic cover around the world as it demonstrates that it is not a bully acting alone in the world; there are two of us. This cover it considers more important than its military contribution, welcome as that nevertheless is. They are not anxious to stand alone nowadays and feel much more comfortable when their old mate is there to take its share (if needs be) of the flak. Although France indicated that it would join them – perhaps anxious to lay President George W. Bush’s “Surrender Monkeys” insult from the Iraq war to rest – it was not the same as having reliable old Blighty. You could at least go into a huddle with him and talk to him in your own lingo.

Would that intervention have changed things on the ground and stopped Assad gaining the upper hand as he has now? I believe not. So long as Hezbollah – the bain of Israel – was willing to throw its considerable military weight behind Assad and as long as Iran kept training its operatives and providing them with hardware and the Russians replacing Assad’s equipment losses there was never going to be an easy or quick solution. And even if the West – assuming it had begun bombing – then proceeded to up the ante to the point where Assad could take no more, what then?

Were we going to allow a fragmented, at-each-other’s-throats band of brothers with no clear agenda of what to do with their newly liberated country take control? I think not. Especially when their ranks had been hugely swollen by fanatical Jihadists, many of them affiliated to Al Qaeda.

All of this now brings us to the most cynical piece of realpolitik since America armed Saddam Hussein to help him stave off defeat by Iran during the Iraq-Iran war during the early ’80s. Have you noticed that government pronouncements, and even media reporting on the Syrian civil war, have gone strangely quiet compared with what it was – and this despite the horrendous losses now put at over 150,000 dead?

It is my belief that, so worried is the West as to who would take over in the event of the fall of Assad, it has decided that the ‘man of blood’ who gassed hundreds of his own people is now preferable to those who would take over and plunge Syria – the cockpit of the Arab world – into even an even greater mess than that which the former London dentist, Assad, has plunged it into.

The nightmare which the West’s security forces face in a pivotal land – one which hates and shares a common border with Israel – is a country that becomes a hotbed of fanatical Jihadists with perhaps Al Qaeda taking the lead. Because of these terrible concerns I fear we are now willing – even preferring – Assad to consolidate his recent considerable gains and go on to win the civil war.

It seems almost inconceivable that a man we have so recently labeled a war criminal and threatened to send to the International Criminal Court at The Haguemay now be let off the hook. ‘Better the devil you know’ now seems to go the thinking. An ordered Syria – even one soaked in innocent blood – is now held to be a better solution than one defying a solution.

So get ready, all of us! Assad may yet triumph against a divided opposition and a befuddled, humiliated West may feel its only course is to settle down to a business as usual arrangement. Given the passage of time, and bearing in mind his own and his wife’s former London connections, the Syrian despot might even be asked, like the executed Romanian dictator, to pay a state visit to London and sup with her Maj.

So here, in a nutshell, is the world we are compelled to live in: a complicated, compromised, infinitely bewildering world in which there are few easy answers nor many quick fixes and certainly no ethical foreign policy such as the late, naïve foreign secretary, Robin Cook, thought he could operate.

← China’s debt-fueled turbo growth will end in tears
Have the years in Downing Street addled the PM’s brain? →