← Why is Labour doing so well in the polls?
Trust the evidence: flying is safe →

The reburial of Richard III draws near 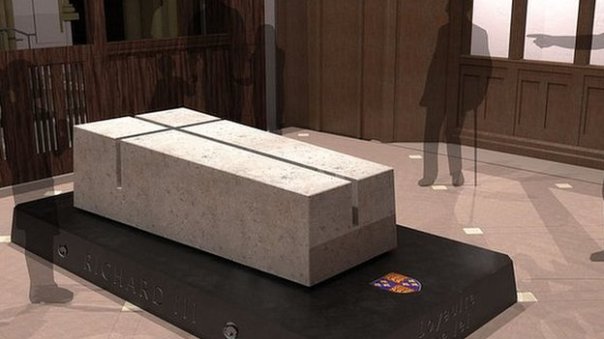 King Richard III’s bones will be placed in a tomb in a remodelled Leicester Cathedral.

I have written four articles on the ‘King under the Car Park’ – Richard III – and this must surely be my last. The juxtaposition between a car park and a medieval king is a strange one. In his wildest dreams the dead king could not have imagined such a scenario. For a start, neither he nor anyone else at that time could have got their heads round car parks, much less the horseless carriages which were stabled there. As for those carriages being able to hurtle forward at unimaginable speeds, it would all have been too much for him. Just as amazing would be the fact that almost all the future subjects of his realm would own one and would be able to travel in perfect comfort and quiet on surfaced roads from one end of his kingdom to the other in hours. His bumpety, bump, clacktity, clack journey would have taken weeks.

It was the longest of long shots that led Philippa Langley, the Scottish Secretary of the Richard III Society, to Leicester’s city centre car park. For years she had obsessed about finding the only English king with no known burial place. They knew he wasn’t buried on Bosworth Field, the battlefield where he was cut down following his Victoria Cross-like heroics. His body was stripped naked and slung over a horse and paraded the fifteen miles to Leicester. That much was known.

Rumour had it that he may have been interred in a long vanished monastery. Others said that his body had been thrown in the river Stour. Yet more, that it was a mystery which would never be solved.

Philippa Langley – the hero of our tale – backed the monastery theory. I imagined she reasoned that although they weren’t going to give him a king’s funeral – usurper and murderer of his child nephews as they alleged him to be – they were most likely to hand his brutalised remains over for burial in consecrated ground such as a monastery.

Furthermore, Henry Tudor, the Lancastrian winner of the battle that unseated him, knew that if he was going to keep his newly won crown he would need to reach an accommodation with the Yorkists. Denying one of their own, a Yorkist prince of the realm – and an anointed king at that – a Christian burial was going to make that next to impossible. There would have been outrage in the Yorkist camp. Even a sinner, if that is what he was, was entitled to the sacraments and Richard’s frenzied, pitiless killers knew that. And even the meanest in the land took their Catholic faith extremely seriously at that time. Hell and damnation awaited anyone who offended against God’s law in a matter like that.

So Philippa’s hunch had a good chance of being the right one. By great good fortune the whereabouts of the monastery – although it was entirely gone – was known to the city authorities. By equally great good fortune – since it was city centre – it had no buildings over the site. That would have totally scuppered any excavation.

Philippa set about raising the considerable sums needed for a major archaeological dig. She also set about rallying the support of city authority who owned the car park, as well as its university which had the disciplines in all the relevant fields to cover the extensive research needed if she was to succeed in finding and authenticating the missing king.

It was all not so much a ‘whodunit?’ as a ‘where is it?’ affair. Both Leicester City and the university realised that success would bring massive rewards in terms of PR and tourism and put both on the map worldwide like nothing they had ever done before.

Even so, a very big if hung over the whole enterprise and a fiasco seemed much the likeliest outcome. Heavy industrial plant moved in on the site ready for the opening day of the dig. All stood prepared to excavate the entire car park if necessary. Every square metre of ground material would have to be carefully sifted. No one expected a quick result. All were steeled for plentiful egg on their faces.

Step forward our hero. “Where shall we begin?” asked the foreman of works. “There, where it says R,” indicated Philippa, pointing her finger. She had months before said, “the first time I stood in that car park the strangest feeling washed over me. I thought I am standing on Richard’s grave.”

In a particular part of the car park was a bay with a big R for reserved marked on it and it seemed as good a place as any to begin. Minutes passed after the tarmac was lifted and the subsoil carefully brought up. And like something yanked straight out of fiction, that very spot yielded a result. At only about three feet down a femur came into view. Though gratifying, that in itself was not cause for jubilation. The evidence was strong that this was where the monastery had been and that this was the area where bodies most likely had been laid to rest.

Following the sighting of the femur, more earth was removed. This time not by plant but gingerly by trowel. Then more excitement as the spine came into view. As the troweling moved up the spine from its base, a shriek was heard. The spine was veering off to one side from the vertical. It carried all the hallmarks of scoliosis – a curvature of the spine – just like Richard was said to have.

This was all too good to be true, even though their hopes were tempered by the knowledge that scoliosis was not that rare. They had managed to establish that it was a man. But did this man die violently? Then the skull was reached and there was exultation. Clear, unmistakable signs revealed that the deceased had died in battle. It was a Eureka moment for everyone, but most of all for Philippa. Tears welled up in her eyes.

Much had yet to be done forensically to authenticate beyond all question, but she had no doubt that her long search was over. A man, born in Canada, would later prove through DNA that the skeleton was of Plantagenet origin. The rest is history. One of the greatest hunts in all of archaeology had come to an end.

Four days of ceremonies will begin on 22nd March. There will be an honour guard of mounted soldiers and a 21-Gun Salute at the battlefield; two hundred children will display medieval, pennants they’ve designed; and four horses will draw the brake on its final journey to the cathedral where it will go on display before the final laying to rest of a monarch who fell in battle 530 years before. How the Tudors would have hated it all.

As for the TV broadcaster covering the event, it has gone bonkers. It’s been said there will have been nothing quite like it since television hit the airwaves. Britain’s reputation for eccentric, yet moving, theatre will have received a mighty shot in the arm. Quite what the rest of the world will make of it no one knows. They’re gobsmacked at it all, yet captivated. And they’ll all be watching.

The present monarch should have attended the reinterment. That much will be very apparent when she sees how her people have risen to the occasion. Richard’s own vile treatment in death will at least have been washed away by a £2.5 million effort of repentance by a remorseful people.

← Why is Labour doing so well in the polls?
Trust the evidence: flying is safe →