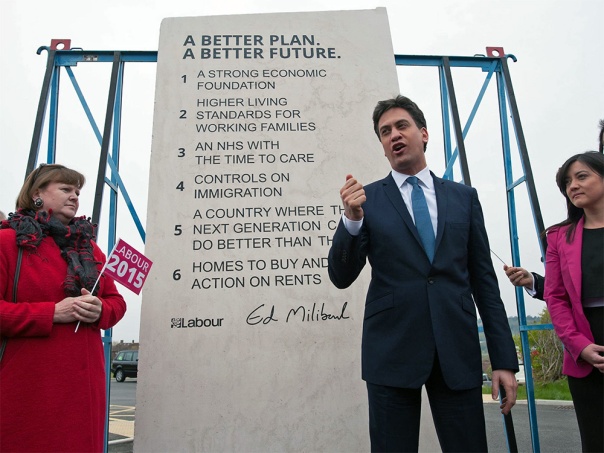 The Ed Stone must have been ordered weeks before it was unveiled, all 2.6 metres and £30,000 worth of it. And the monster wasn’t going to be installed at Labour party headquarters, but in the rose garden of Downing Street, for God’s sake.

How to explain last Thursday? Reading people’s minds is far from the exact science the pollsters would like to pretend they have made it. And reading British people’s intentions may be the toughest nut of them all to crack. G.K. Chesterton had it right when he wrote:

Smile at us, pay us, pass us; but do not quite forget,

For we are the people of England, that never has spoken yet.

Hells bells, the people spoke alright last Thursday. They did it in the privacy of the polling booth. It was almost in the nature of a raised finger to those battalions of know-it-alls who told them how they were going to vote. There may also have been an element of bloody-mindedness in that decision which ended up stunning the world. Yet it wasn’t, in my view, an innate shyness to tell or an enjoyment of being a spoiler that was at work, but a cold hard appraisal of what was at stake.

Harold Wilson may have said that “a week is a long time in politics,” and so it is. But for all that, people weren’t readily going to forget an event of even six years before – when the cash points were within forty-eight hours of running dry and salary transfers could not have been made to banks. It was as dire a situation as it is possible to imagine. That same government of Gordon Brown had not long before given them an almighty fright by getting into a dispute with tanker drivers so that food, itself, was also within forty-eight hours of running out in the supermarkets. We got to realise, for the first time, how slender were the stocks they held and how utterly dependent they were on a fast turnaround.

Now they were being asked to give their trust to the same group of people who were at the helm at that time and who had gone on to display a level of fiscal incontinence unique in British politics. They thought about the man who was asking us to make him prime minister and the Damascene conversion he had made at the last minute to fiscal rectitude. The difficulty was that they had trouble believing him; he was still so purblind that, to the very end, he couldn’t bring himself to concede that the previous government, in which he had played an important part, had borrowed too much (it was all the fault of those damned foreigners he intoned ad nauseam… the worldwide credit crunch and all those wicked bankers). Every country had suffered, so he maintained.

The problem was that those countries which had not got themselves into debt were able, largely, to cope with the crisis without massive programmes of austerity. These and many other thoughts went through voters’ minds in the run up to the big day and even in the polling booth itself. A huge question mark hung over Miliband in particular as he just did not seem prime minister material – and certainly not when compared to the smooth, polished Cameron. This perception was reinforced by his opportunistic and silly decision to go and talk to Russell Brand. That garrulous, machinegun-like spouter of nonsense was the last person in the world calculated to reassure a worried public. And then there was that Ed Stone. ‘Oh, dear,’ thought the electorate. Where were the armies of special advisors that let that one go through?

It may have been some silly Yank’s idea, but gullible, unworldly Ed thought it a great one. What was he thinking? Talk about hubristic presumption. It must have been ordered weeks before it was unveiled, all 2.6 metres and £30,000 worth of it. And the monster wasn’t going to be installed at Labour party headquarters, but in the rose garden of Downing Street, for God’s sake.

Did he seriously think that future prime ministers – and, hell, we had not made him that yet – would want their lovely, sweet-smelling roses cast into perpetual shadow by such ‘monumental’ nonsense? And what about planning permission? Had he thought about that? After all, Downing Street is a listed building. Perhaps after he’d brow-beaten them into submission he intended to take it with him at the end of his long, glorious term of office and have it installed on the unused plinth at Trafalgar Square. How the episode plays to the blog post I once wrote 3 ½ years ago about the fall of Dominic Strauss Kahn titled ‘The Foolishness of Clever Men‘.

At the end of the day the great British public saw no sense in imperilling the undoubted progress that had been made in stabilising the economy, and they certainly didn’t want a cantankerous tartan army descending on London, gurning all the time about how hard done by they were and demanding ever more Danegeld. Nor did that public relish the thought of the slippery, cocksure Alex Salmond appearing once more out of the Scottish mists like the ghost of Banquo. It would have been unbearable were he to have ended up de facto deputy prime minister, slipping in and out of Downing Street at will and browbeating a hapless Miliband.

Finally, in an ever more competitive world people did not see that it made sense to drift back into left-wing policies that had been tried umpteen times and always found wanting. Not a single Labour administration had ever left office without the public finances being in an unholy mess. The people understood that, for the security of their jobs and the wellbeing of their country, a business-friendly mind-set was key.

So convinced was I, as well as another member of my family, that these ‘neck and neck’ polls were nonsense that we placed a £50 bet each on a clear Conservative majority (at 15:2 odds) and won a total of £830. Our mantra should always be to trust the people; they get it right most times, whether it be General Elections, Strictly Come Dancing or X-Factor.