Turkey should be embraced, not scorned 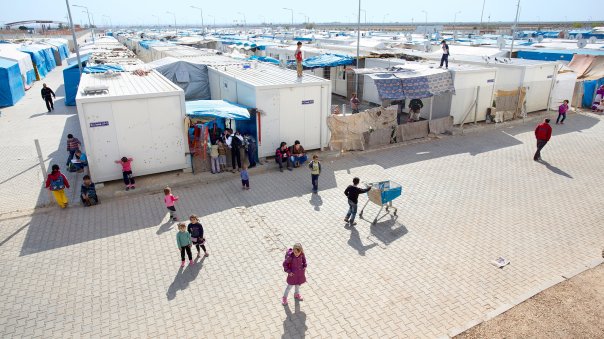 Kilis, a refugee camp in Turkey near the Syrian border.

I wrote some time ago that the EU was making a big mistake by playing hardball with Turkey’s application to become a member. They fear that the entry of a major Muslim country will have a destabilising effect.

They fear a possible Trojan Horse whose admission could immerse our continent in many of the horrors currently being visited on Turkey’s neighbours, Syria and Iraq. They couldn’t be more wrong.

Turkey is the obvious Muslim country which stands any chance of enabling Europe to gain acceptance throughout the Muslim world as a friend. As a member of the EU, it would send a signal to all Muslims that Europe is not irredeemably prejudiced and could happily work with them to build a better and more secure future. Once a member, you could be sure that Turkey would go after the nihilist maniacs with a sure-footedness that is not open to the rest of us.

Remember that Turkey single-handedly kept order throughout the Near East and North Africa for 500 years right up to modern times. Millions of Turks headed for Germany by invitation during the post-war years of the economic miracle to help rebuild that country’s shattered industries and infrastructure. They were known as ‘Guest Workers’ and the understanding was that, in due course, they would return to their homeland. They were not meant to stay.

So little did they offend their German hosts, however, that they were never asked to leave. Theirs proved to be the face of Islam that Europe never needed to fear. Even with the recent controversial admission of the huge refugee influx triggered by Chancellor Merkel’s off the cuff offer, there is not in Germany the festering resentment among Muslims and, indeed, Germans that exists in France. Two reasons account for this. In Germany, there is not the ghettoisation and lack of jobs as in France. Also, France’s Muslims are, for the most part, of Algerian origin and are the legacy of a bitterly savage colonial war of independence. Neither side fully forgave the other.

All of us can agree that Europe is at a crossroad in its relationship with the Muslim world. An implacable death cult has cast a shadow over all the continent’s urban conurbations and the crowd-gathering events which are staged there. Messaging each other in the new Wild West of the internet in an encryption form harder than Enigma to crack, they can operate in cells or as ‘lone wolves’ with manuals provided to allow them online to acquire and assemble deadly bombs. How the zealots of the IRA must regret that they never had such tools.

The result of it all is that people increasingly live in a fear they have never known before. They know the authorities have no answer, and never can, to the lone operator who can drive a truck or buy a knife across a supermarket counter. Even if we succeed, as we very well might, in taking back the land which Isis has claimed for its new Caliphate, its fighters will disperse throughout Muslim lands and perhaps our own and reappear hydra-headed to continue the mayhem. It is a depressing prospect and one to which we can envisage no end.

My own regular visits to London, its museums and places of interest, have lost their appeal. On a recent visit, I found that the dear old British Museum, an endless source of wonderment to me, had a half-hour long queue for semi airport-like security checks. I took one look and went on my way. In a long life, I had hitherto been able to wander up unmolested and pass through its hallowed portals unchallenged. That soon will become a distant memory. Security everywhere has become the order of the day.

We must resist. Turkey can help us for only it, as a Muslim nation closely allied to the West with NATO’s second largest army, can help us confront the threat ideologically. And that is the only way this death cult can be beaten.

Followers of their own faith must turn on them en masse. Their communities and their own families must place them beyond the pale.

The cowardly recruiters and dissemblers who encourage disaffected youngsters whose lives have gone off the rails to make an end of themselves and carry as many as they can into oblivion with them must be taken out of circulation and denied any platform to propagate their poison. Theirs should be a special place in perdition.

Turkey has already won the hearts, as well as plaudits, from the millions driven from their homes in Syria. Their efforts to provide a refuge from Assad’s killing machine dwarf those of any other nation, including Germany. The camps they have set up are a model of humanitarianism; they provide every conceivable facility and resemble more villages more than camps. Turkey receives scant recognition for her huge efforts and, needless to say, massive expense. And this from a nation which, unlike those in the West, cannot be described as rich.

For all the frequently ill-informed criticisms of Turkey’s president, he has proved himself a man with a heart which is more than can be said of many of the rest who weep crocodile tears. With 14 years of enlightened economic policies, he has also achieved growth rates the envy of all but China and India. In short, until these terrible troubles on his border, Turkey was booming.

My own message is clear: Turkey should be embraced, not scorned. If we continue to reject her overtures she will turn her back on us, and rightly so, with dire consequences for any last hope of getting back to normal and putting terrorism back in the malign box where it belongs.